Menu
AuditionsDonate
It is with great sadness that we announce the cancellation of our 2020 Production of The Community Nutcracker. Click here to read more 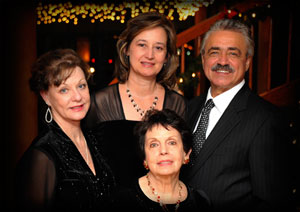 A native of Jacksonville, she received her early dance training from Thelma Johnston Baggs, who instilled in her the passion, love and educational value of the art of ballet. In 1977, she graduated with honors from Jacksonville University where she was recognized as Outstanding Female Performer. Futher ballet studies include training with notables such as Edward Villella, Maria Tallchief, and Ted Kivitt.

Her career in arts education has given her the opportunity to teach and work with approximately 600 students a week to mold, mentor and direct their lives through dance. Rankin's elementary dance curriculum has been used as a model for the arts magnet schools in Duval County. Since 1988, she has taught dance in Duval County Public Schools, Douglas Anderson School of the Arts, Landon Middle School of the Arts as well as Pine Forest Elementary School of the Arts, where she is currently a full-time dance teacher. On the national level, she and fellow arts educators from Pine Forest Elementary School were selected to present workshops at the Arts School Network and the Magnet Schools of America Conferences.

Years of service to the community have been spent choreographing and directing for productions ofThe Nutcracker in Jacksonville. She served as director of the First Coast Nutcracker from 1977 to 1991 before becoming a founding director and choreographer for the Community Nutcracker in 1992.

Currently, Rankin is the owner and artistic director of the Baggs Studio of Ballet, located in the historic Riverside area and directs and choreographs original works for the Jacksonville Concert Ballet Company.

She was born in Cuba where she studied ballet under the direction of Alicia Alonso, Alberto Alonso and Georges Milenoff. She continued her instruction with George Balanchine, Anatole Oboukhov and Pierre Viadimirov at the School of American Ballet. At age 15, she was accepted in to the American Ballet Theatre where she made her professional debut as a demi-soloist. She was first soloist with Ballet Alicia Alonso, later named Ballet Nacional de Cuba. In 1956, she obtained the title of Prima Ballerina at the Stuttgart Opera Ballet. Later, she joined the Munich and Hamburg Opera Ballet. She has been a guest artist with the Marseilles Opera and the Goethe Institute representing Germany in their Cultural Tour through Europe, Middle Afghanistan and India. She returned to the U.S. to tour with the Michael Maulé Dance Concerts and joined the Ballet Concerto in Miami.

Ms. Anaya was Director Assistant and Ballet Mistress at the Munich Opera where she staged Giselleand Sleeping Beauty. She has been a guest instructor at Volks Opera in Vienna, Austria, Munich Opera and the Oregon Ballet Theatre, staging the full-length Coppelia.

In 1970, Anaya founded the Jacksonville Ballet Theatre, presenting the first full-length production ofThe Nutcracker at the Alhambra Dinner Theatre. She was director/choreographer of the Amelia Island production of The Nutcracker as well as a director for the First Coast Nutcracker Ballet for three years.

Currently, she is the director of the Dulce Anaya School of Ballet and one of the founding directors of the Community Nutcracker.

He was born in Kiev, Russia and began dancing at the age of 12. He attended Professional Dance School until his graduation in 1965. Upon graduation, he performed throughout the Soviet Union and abroad with the Ukrainian Concert Organization, Russ Concert Organization, and was the principal dancer of the Red Army Ensemble. In 1971, he was accepted to the Institute of Culture and Art where he graduated as a teacher, choreographer and business administrator. In 1975, he formed the Tripoli Dance Ensemble, which was awarded a Gold Medel for the National Festival in 1977. He traveled throughout the USSR and Europe.

He is well known for his master's classes throughout the country. He has taught at state conventions, national conventions and colleges from Washington, D.C. at Portland, Oregon, from Florida to El Paso, Texas.  He is an active member of Dance Masters of America, State Dance Association. Spivak was on the national board of Dance Masters of America as well as past president of the Florida Chapter.

For 10 years, he was one of the artistic directors of the First Coast Nutcracker. He is a founding member of the Community Nutcracker Inc. and a faculty member at Douglas Anderson School of the Arts. Currently, Spivak is the artistic director of Mark Spivak's Institute and Dance Extension. He is also director of Mark Spivak Character Ensemble located in Jacksonville, Florida.

She is a native of Jacksonville and a product of the Ballet Arts Centre, which was founded by her mother, Betty Balfour Marks. Growing up fully understanding the discipline and dedication that the art of dance demands, she pursued the versatility that different techniques offer. She has trained with master teachers of classical ballet, contemporary and jazz techniques such as: Madame Peraslavic of the American Ballet Theatre, Alvin Ailey, Martha Graham, May O'Donald, Luigi, Matt Mattox, Nat Horne and the Paris American Academie.

Marks danced professionally for five years throughout Europe with the Theatre Am Geotheplatz in Bremen, West Germany in original ballet works, musicals, operettas, opera and television. Then she returned to the U.S. and assumed the directorship of the Ballet Arts Centre.

She served as director of the First Coast Nutcracker for 10 years. She was the Ballet Mistress for the Florida Ballet at Jacksonville and taught for their summer dance workshop. She is a member of Dance Masters of America and the Florida Dance Association, with which she has served as a member of the Board of Directors and as faculty for the Association's Summer Dance Festival.